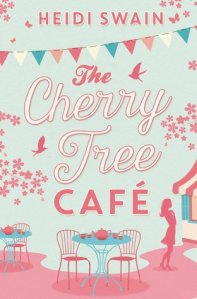 The Cherry Tree Cafe is a sumptuous new novel by Heidi Swain, which is perfectly accompanied by a cup of tea on a lazy afternoon. And that’s all the time you’ll need to read this decedent book, as I promise, you won’t want to put it down. Heidi’s writing flows effortlessly, and you’ll feel as though you are in The Cherry Tree Cafe yourself, enjoying a catch-up with friends.

Anyone can relate to that feeling in life where you’re not quite sure which way to turn, and it’s at that point that we join Lizzie Dixon. After a disastrous break-up with the ultra-sleek Giles, Lizzie returns to her home town, her over-bearing mother, frantic but lovable god-daughter and best friends. It isn’t long before Lizzie begins to feel like her old self and realizes just how much she changed during her past relationship. Will Lizzie ever get over the regret of allowing herself to change for a man who used her so cruelly?

It’s at this point that Lizzie’s best friend entices her to venture into investing in a new business. The Cherry Tree Cafe is born, full of shabby chic character and that comforting homemade touch that has made such a comeback. Lizzie’s previous love of sewing and craft is drawn out, and she finally finds herself feeling comfortable in her own skin again after starting crafting sessions in her own cosy corner of the cafe. That would all be too easy though wouldn’t it?

Ben Fletcher, Lizzie’s high school crush is also back in town, stirring up old feelings in Lizzie that she thought were dead and buried. Jay, a local journalist also makes an appearance, and causes mayhem at the once peaceful Cafe. With lots of frustrating misunderstandings, twists and turns, you’ll be glued to this book until you can ensure a happy outcome. Will Lizzie abandon The Cherry Tree Cafe for bigger plans, or has the best option been staring her in the face all along?

Heidi Swain creates a delightful bond between reader and character, which means you will want to ensure Lizzie finally gets her happy ending. Lovers of The Great British Bake Off, The Great British Sewing Bee and general Domestic Goddesses will delight in a slice of The Cherry Tree Cafe.